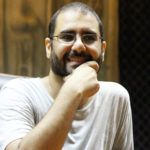 Egypt’s Court of Cassation issued a final ruling on Wednesday to uphold political activist Alaa Abd El Fattah’s five-year prison sentence on charges related to protesting. However, the court commuted the mandate that the term be carried out in a maximum security prison to assign Abd El Fattah to a general population prison.

Abd El Fattah will also have to undergo five years of probation after his release, in addition to an LE100,000 fine, as was decided in the February 2015 criminal court sentence Abdel Fattah appealed.

Lawyer Mokhtar Mounir told Mada Masr that the penalty change basically means that Abd El Fattah would serve his sentence in a general population prison without the rigorous conditions of a hard-labor imprisonment.

Mounir also added that a one-year sentence in a general population prison is nine months, in comparison to 12 months in hard-labor, but added that this difference is usually disregarded in the cases of political prisoners, such as the 6 April Youth Movement’s Ahmed Maher and Mohamed Adel.

Lawyer Mahmoud Belal told Mada Masr that the penalty change will have no real implications, insisting that the ruling is tantamount to the court rejecting the appeal, as types of prisons in Egypt do not differ greatly.

Abd El Fattah’s appeal was originally set to be heard on October 19, but the judge in the Court of Cassation circuit presiding over the case recused himself, citing “discomfort,” which lawyers believe suggests an issue of impartiality.

In February 2015, Cairo Criminal Court sentenced Abd El Fattah and Ahmed Abdel Rahman to five years in prison for charges of protesting in front of the Shura Council, with an additional five years probation and a LE100,000 fine each. It also sentenced each of the remaining defendants to three years in prison, three years probation and a LE100,000 fine.

All 21 defendants in the Shura council case appealed the verdict, and were released pursuant to a presidential pardon, except Abd El Fattah.

Abd El Fattah is awaiting another verdict on December 30 for charges of insulting the judiciary, along with 24 other defendants, including former Islamist president Mohamed Morsi.

← Islamophobia, 20 years later: How we can hope to defeat it
The “Syrianisation” of the world →